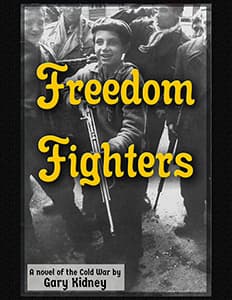 When you find a cause you believe in, fight for your belief.

Freedom Fighters is a historical fiction thriller, spy versus counter-spy, set during the 1956 Hungarian Rebellion. With Stalin dead and reform on the minds of many people in Soviet satellite nations, the CIA wishes to provoke a crisis. They send agent "Zelly" Zellner as a replacement professor of engineering at Budapest's Technical University. As part of his cover, he takes along his 12-year-old son, Gunny.

KGB counter-spy Andrei Novitsky aches for a promotion as the last of his class to remain a lieutenant. Needing more field work, he speculates Budapest is a likely flashpoint. Pretending to take a vacation, he takes his 12-year-old son, Yuri, to Hungary to prevent an uprising.

With Zelly and Andrei pitted against each other, the boys prove valuable to their fathers' missions. They meet and become friends. In the whirlwind days of war, the boys discover things that change their perspectives. Fathers and sons do not always see eye-to-eye. Events compel actions that test the bonds of family and friendship. As the Hungarians and Soviets array on the battlefield, what the four characters learn about themselves, each other, and their world changes everything.